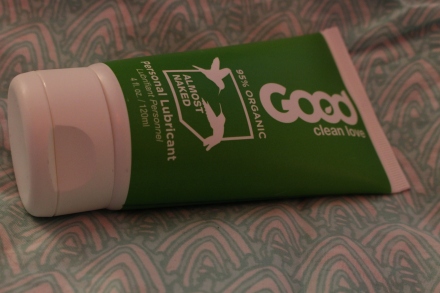 This is the first lube review I’m doing, though I use Sliquid H2O constantly and it’s my usual go-to, so let’s see how Good Clean Love’s lube can compare to it! An extra review of Sliquid H2O will be up next week because I swear I thought I already had one done.

The official list of ingredients for Good Clean Loves’ Almost Naked lube is as follows, taken from their official website:

They claim that their lube is 100% vegan and gluten free, and “95% Organic” on their bottles.

Now, personally, I am not allergic to any of these ingredients, but I know that some people can have reactions to Aloe, which is their first ingredient. The “natural flavors” that they add are vanilla and lemon. If you have reactions to citric acid or aloe, I’d try it somewhere first, such as your arm, to make sure that you won’t have any reactions.

The smell is honestly the best part for me. It smells a lot like my Sliquid, but with warmer undertones that make it very pleasant. I don’t mind the smell of lube, it can honestly be a kind of turn-on for me because i need it in any sexual situation, but the added notes of vanilla make it just a little nicer. The taste, however, is absolutely not affected by these additions for me. If anything, it tastes worse than Sliquid H2O. I know both aren’t meant to be flavored, but while Sliquid is neutral if ever so slightly acidic, GCL’s Almost Naked is very sour and acidic while being cool and….squishy. As lube is supposed to be, so i can’t fault it, but to me it’s a little unpleasant.

GCL’s Almost Naked lube is thicker when not in use than Sliquid’s, it stays in a little dot at the top of my toys for much longer. I have to say that it also lasted a little longer during use than Sliquid’s, though I noticed it felt a little more…squeaky, almost? Slippery would be the right word, but usually describing lube as slippery is a good thing. It felt like the was still some friction in places, as it things were sticking before sliding like they were supposed to, even though the lube still hadn’t worn out. It does it’s job well though, and I would suggest it over Sliquid H2O for anal play due to being thicker.

The one thing that absolutely drives me away from this lube, and makes me struggle to suggest it even though in use it’s great, is what happens when it dries. I know that there’s usually a lot og gunk everywhere after using toys. It happens, there’s nothing wrong with it. But after using GCL’s Almost Naked, it gets SO much worse. It dries completely opaque, thicker than usual, and flakes more easily. It’s kind of gross, and much harder to clean than usual. If this sounds like something you couldn’t deal with, I suggest not getting this lube. I don’t notice any changes in gunk output when I use Sliquid H2O or Sea, this seems to be GCL specifically.

Besides the issue of cleaning, which honestly probably wouldn’t be half as much of a problem if I cleaned up when everything was still wet, immediately after, I highly suggest this lube if you’re not allergic to any ingredients. It’s natural, good for vaginas, lasts long, and makes sex so much safer, though all lube does that. You can buy it from GLC’s official site if you want to try it out! I have a 4oz bottle, and it’s lasted me for months so far.

I am not affiliated with any company or website that I linked in this review!